Last weekend marked another milestone (pun intended) in my saga of minimalist running. I completed my fourth half-marathon (@13.1 miles) in the last two years: the Publix Georgia Half Marathon. It's the third time I've run this race, and this time was faster than either of the previous two. Gettin' older but gettin' faster, yo! 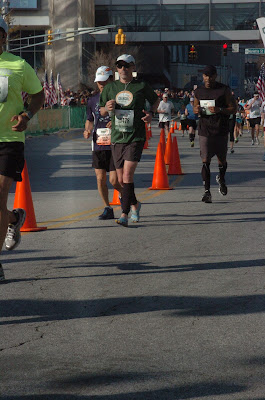 You'll notice I'm wearing my Vibram Five Fingers again. And compression sleeves on my calves (about which more infra).

This weekend also marks another significant milestone. Beginning in December '09, several months after I began running again (after an absence of some quarter century), I started keeping a scrupulous mileage log. The week before the Publix, I crossed the 1,000 mile mark! Most of those miles were in one of my pairs of Vibrams, but over 200 were straight-up barefoot. In that time, I've run 29 races (5Ks, 10Ks, and half-marathons mostly, but some trail runs as well).

Two significant failures to report: I tdid not finish an 11-mile trail run in February '10 when my legs froze up—macho idiot! I wore shorts, and the temperature dropped as the race wore on, down to the low 20s. I could only run ~9 miles that day into the teeth of a north wind coming off Lake Allatoona. Had to walk out the rest. This summer, I trained for the Atlanta Marathon which took place in October. I got my LSD runs (Long, Slow, Distance, that is) up to about 15-16 miles in August (Heat! Hills! Humidity! that's our motto here in the ATL), but my Achilles tendons got so sore I had to stop training. I did not even run the race.

Since then, I've learned it wasn't Achilles tendinitis. Whew! It had to do with these mysterious things called Trigger Points in my calves. The notion of referred myofascial pain caught me off guard. I learned how to massage the proper trigger points mid-calf (with "The Stick" among other things), and the faux Achilles pain went away. No Achilles issues in Sunday's half-Mary. I wore the compression sleeves because the trigger point on one of my calves was really sore. It didn't hurt a bit after the race. I even ran a fast 5K the next weekend (finishing 2nd in my age group [by 30 seconds]). I can't recommend the Trigger Point massage book enough if you have any sort of vague muscle pain.

For the record, I plan to train for and run a full marathon—maybe this fall. At the Expo/packet pick-up before the Publix, I met a group of folks dedicated to running a marathon in each of the 50 states. Now, there's an idea! The seed, I'm afraid, has been planted.

Somehow moving to Ohio changed all that, (along with me waist size). I guess I should think about getting back to it, although foot pains might stop me. (I could still do treadmill, though.)
~

@if: I used to run the Reservoir in CP until work and kids took all my time and energy. We might've crossed paths in NYC. I was there from '85 to 2000.

I hate the dreadmill. Look into that whole trigger point thing if you think you have plantar fasciitis.

I think I'm going to vicariously get in shape through you.